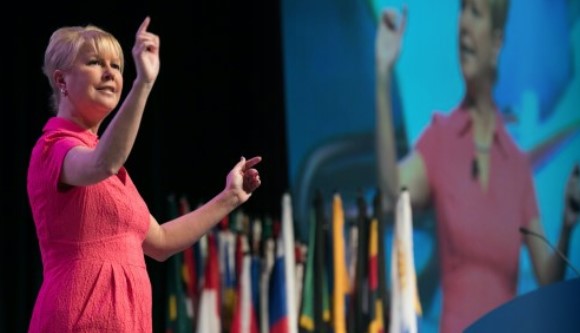 Jennifer Jones is poised to lead Rotary into a vibrant, diverse future

President-elect Jennifer Jones’ office at Rotary International world headquarters in Evanston, Illinois, feels different from those of her predecessors, but that’s in no way a result of the fact that on 1 July she will become Rotary’s first female president. On the wall hangs a recent gift from a friend — a black scratch-off map on which Jones can record every Rotary destination she visits during the next two years. When we speak it’s September, two months since she took office as president-elect, and on the map, only Chicago has been revealed —many planned events were canceled or postponed due to a rise in COVID-19 cases.

Jones elbow-bumps her visitors, Rotary magazine senior staff writer Diana Schoberg and senior editor Geoffrey Johnson. Then, spaced apart at a table in her office, they discuss her vision for the year ahead. “If you start to think about how exponentially Rotary can touch the world, we’re more than a club,” Jones says. “We’re a movement.”

Jones is president and CEO of Media Street Productions Inc. in Windsor, Ontario, where she is a member of the Rotary Club of Windsor-Roseland. Her company’s specialties include radio and television production, corporate and nonprofit videos, and live show productions. Using her media background to elevate Rotary’s global profile is one of the primary goals of her presidency, and Jones is planning what she calls the “Imagine Impact Tour” to showcase to the world several large-scale, sustainable projects in each of Rotary’s areas of focus. “I see this as a way of increasing our membership,” she says. “When we tell our stories, like-minded people will want to join with us.”

A Rotary member since 1996, Jones played a lead role in the organization’srebranding effort by serving as chair of the Strengthening Rotary Advisory Group. She is co-chair of the End Polio Now Countdown to History Campaign Committee, which aims to raise $150 million for polio eradication efforts. She also led the successful #RotaryResponds virtual telethon in 2020, which raised critical funds for pandemic relief and attracted more than 65,000 views.

You’re going to be Rotary’s first female president. What does that mean for Rotary?
When I was selected, although the process was virtual, everybody went around the “room” to reflect on something that was said during the interview. One of the points that was repeatedly emphasized was that I was selected for my qualifications, not because of my gender. I didn’t enter the interview with gender being at the forefront of my thinking. However, I do think that for our organization, it was an incredibly significant moment. Diversity, equity, and inclusion is so important not only for Rotary but for our world. Maybe my nomination is happening at the right time.

When I gave my acceptance speech at the 2021 virtual convention, I mentioned my 10-year-old niece during the opening. She had given me a drawing of herself that included the words, “Different is always better. Different is me.” I loved it and was so proud of her for proclaiming this statement, so much so, that I ended the speech using her exact words. [Being different is] nothing to apologize for. One of our core values is diversity, and this is another way that diversity is represented. It’s just that it took 117 years for that to happen.

Have you met a 25-year-old who is old? We all have. Have you met an 86-year-old who is young? Of course. So I talk about young thinkers. It’s something that resonates regardless of where I am in the world. Embracing the fact that we are people of action speaks to our joie de vivre. We step out. We do things. That is what I think of in terms of young thinkers. We’re the people who make things happen in our world and our community.

We have such a brilliant opportunity to capture what I like to call cross mentorship. Sometimes a great idea comes through the lens of experience, and sometimes it comes from someone who hasn’t already been told that they can’t do something or that it needs to be done this certain way. When we look toward younger participants in our organization, they give me hope that we can look at things through fresh eyes, that we can constantly be in a state of evolution. This is going to be a very wide generalization: If you have a great new idea, and you give it to a Rotaract club, within days they figure out what it is that they’re going to do. They’ve launched some sort of social media presence. They’ve called out and connected with partners. They’ve done all kinds of things. They take action really fast. Similarly, you can give it to a Rotary club, and what do we do? We form a commit tee and then we have meetings, lots of meetings. That’s not to be dismissive of that more deliberate path; I say that very much in jest. But the bureaucracy some times can bring us to a slow stop and be frustrating for people.

There is an opportunity for us when we look toward the younger demographic. They just do things differently. And I think that’s something we truly can learn from them.

What’s the first sentence of the opening chapter of your presidency?
It’s one word: imagine. 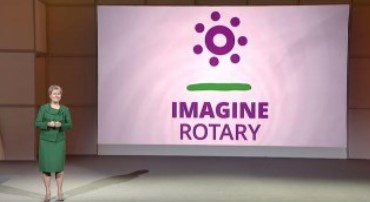 How did you come up with that?
Imagine to me is about dreams and the obligation to run after those dreams. I want people to think about the things that they want to achieve, and then use Rotary as the vehicle to get there. We have such a huge array of opportunities in front of us, but we need to channel our energies so that we make sustainable, impactful decisions about what we do. The most powerful thing for a member is to be able to say, “I have an idea.” And then to share that with others and to amplify it and figure out where to go with it. Imagine is an empowering word, giving people permission to say that they want to do something to make their world better, and they can do it because they’re part of this family. 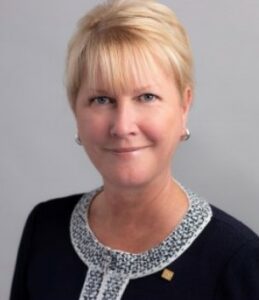 – Imagine to me is about dreams…